Today I’ve got a really exciting collab with the lovely Aditi @ One in a million!! She’s a seriously great blogger & I love her to bits so you should definitely go & check her out!! 🥰

Adi reached out to me wanting to do a collab & we went back & forth for a bit until I thought of THIS AMAZING IDEA (um…chill out El, loads of people have probably done this already 😂) but basically, we went to a library & just picked a book at random. We weren’t allowed to read the blurb or look at any reviews of it or anything, just had to read it and see what we thought!

This was a really hard challenge for me! I went to the library & immediately realised that just picking a book without judging it on it’s cover was gonna be so hard! So I went with this one, which was the book I saw first when I came in.
My first impression was that it looks pretty cool! I mean the skulls & fruit & knives?! It’s got a bit of a mythical-creepy vibe and actually reminded me of Watership Down with the hares and everything. 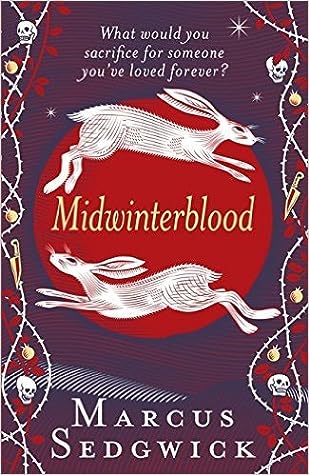 Adi’s first impression (She was allowed to read the synopsis & look at the cover – but I didn’t read her opinion until I was done!)

Whattt? The name, what. does. it. mean. Midwinterblood sounds ominous and maybe a dark fantasy story? Let’s check out the cover: I’ve gotta say, the cover may not be the best, but it’s pretty darn creative! Now I’m wondering- what does this story have to do about rabbits… and skulls?? #whattt

Since my curious-ness is becoming a bit overwhelming, we’re gonna take a look at the synopsis ;)Ok ok ok. Here’s my thoughts:

Firstly, this may not be a dark fantasy. I think this is sort of supernatural YA novel. Lots of short stories? Not sure how that sounds for me since I haven’t read anything in this format. 2073 to the Viking days. This means it’s also sci-fi. Eric and Merle (how do you say that? Mer-la? Mar-la? *Future El: I pronounced it like it rhymes with pearl*) love each other, and they find each other in different forms- lovers, parent and child, siblings, teacher and student?– and try to remain with each other. This sounds quite adorable, and I’m actually starting to think that this story might be a cute read (though the TITLE OK ASDFHGJK) with… lots of layers. Like an onion. Ha don’t mind me I’m just writing nonsense and referencing Shrek over here.

Backkk to the title. What in the world does Midwinterblood even mean?? Is it like a Shakespear reference (midsummer night’s dream? nah) or a bloody reference to murder and bloody stuff and blood?? ACK HELP ME.

I’m actually so glad that I didn’t read the blurb on this one because there’s a major spoiler on the back which would have ruined all the mystery and tension. I hate it when blurbs basically tell you all the plot twists but, hey, thanks to this challenge, the book didn’t get spoiled!

Overall, the book was so incredible! It was all planned out so well with clever links between each part & the characters were gorgeously described & made up. It’s definitely not one of those books where you become BFFs with the characters as it’s written with a slight disconnect to them, mainly in 3rd person but with a bit in 1st but don’t worry! It’s all done to add to this eerie vibe where you don’t really know what’s going on.
Speaking of, there’s not a we-must-solve-this-Sherlock-Holmes mystery but there is a mystery. More of a creepy, unsettling mystery (but no horror really for anyone worried about that). It was great though because you just did not know what was going on until the very end when it gave you that satisfying ‘everything makes sense now!’ moment (*cough*unless you read the blurb, which spoiled everything*cough*). It was great to guess at what was happening though & to see how my theories adapted to new information.

There are actually a lot of really sad moments in the book & I really didn’t expect to feel them as much as I did, even when a character I didn’t like died (that’s not a spoiler even though it sounds like one, I promise!) but they really enhance the story & bring you closer to the characters because, as I said earlier, it’s not the kind of book where you’re crazy attached to the characters but it does give you an understanding of them.

If you think this sounds interesting then here’s a non-spoilery synopsis (the goodreads one is ok but still a little bit 😣 and also just really short? But DEFINITELY do not read the blurb 😂)
An unsettling vibe featuring rituals, vampires (only for a little bit though), a magical creepy flower, ghosts (not the white translucent kind) and a whole lot of hares.
The story is broken up into multiple different parts, all set on the same small island but throughout time, ranging from far in the future to war times to Viking times (there really is something for everyone).

After reading El’s review, this book seems interesting, but maybe if I had the choice to pick it up in a library versus a contemporary/fantasy/LGBTQ+ novel, I wouldn’t pick it. She recommends it, so it is going on my TBR! But I don’t know… will I love it? I tend to need a connection with characters to enjoy a story. According to El, there isn’t much of a connection to the main characters. Regardless, I will add it to my endlessss TBR list 😀

So I definitely enjoyed reading this book but will I try this method of book seeking again? Um… probably not. Just because there’s a high chance that I’d hate the book! Anyway, it was good that I avoided the blurb on this one though so I’m happy that I didn’t get spoiled, after I’d finished it, I read a lot of reviews from people who’d had the whole mystery spoiled for them & that just sucks

Thank you for reading – NOW GO READ ADITI’S POST! You’ll see (read?) her own experience’s picking a book at random & my thoughts on her book.

And thank you to Adi, who made the amazing featured image for this collab! ❤